Clos Malverne Does ProWein 2015: “Germany, Düsseldorf once again impressively underlined its reputation as a metropolis for the wine and spirits business: after three days of activity ProWein 2015 came to a very successful close on Tuesday, 17 March. 5,970 exhibitors from 50 nations featured in Düsseldorf. All major wine nations and cultivating regions were present in the nine exhibition halls – the “classics” from Europe and the New World as well as the more “exotic” on the international scene (like Bolivia and Armenia). No less varied was the line-up from the 420 spirits exhibitors from 30 countries. This spanned classy brandies and liqueurs through to national specialities and international classics”. – From www.prowein.com

Clos Malverne was among this great number of exhibitors to highlight their products at this auspicious event. “Being the world’s largest wine and drinks exhibition, this endeavour requires serious planning”, according to winemaker Suzanne Coetzee. “Gone are the days of producers staffing their stands with the hopes that people will choose your product by mere chance. Meetings with key partners, existing and prospective, need to be arranged weeks in advance, as the show is of such short duration. It also offers producers the opportunity to connect with customers who are already familiar with our brand. It was great seeing the Bauer’s, regular visitors to the farm and restaurant while in South Africa, who subsequently joined us for a great dinner that evening”. 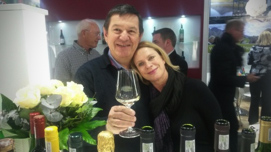 Suzanne presented a further few tastings while in Germany, in Wiesbaden and Cologne respectively (after surviving a stressful episode of getting on the wrong train!), meeting up with many other loyal fans of Clos Malverne.

“Running from one meeting to the next, with trade tastings in-between, leaves one with little opportunity to try some of the fabulous wines on display, and of the few I did try, my favourite was a Cabernet Franc from Chile”, says Suzanne.